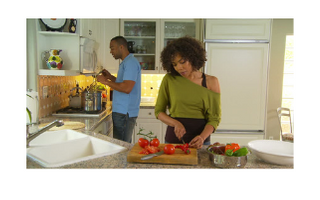 Why can one person eat like a growing teenager and not gain a pound, while another person’s every indulgence shows up on the scale? Chalk it up to individual differences in metabolism, muscle mass and physical activity.

What IS Metabolism anyway?

Metabolism is the process by which our bodies convert what we eat into the energy we need to survive and function.  It powers everything from breathing to blinking. A fast metabolism is like a hot furnace that burns through fuel (calories) quickly. A slow metabolism needs less fuel to keep a body running.

It’s tempting to blame weight gain on a slow metabolism, but there are ways to support metabolism and maintain a healthy weight.

Myth: Our metabolic rates can’t change.
The truth: While it’s true that genetics help determine our metabolic rates, we can boost metabolism by increasing lean muscle mass. Muscle is metabolically active, which means that people with lean, muscular bodies need more energy to function than people with a higher percentage of body fat.

Our muscle mass decreases as we age, and this contributes to a slower metabolic rate. But you can counteract this process by picking up the weights as well as keep in moving aerobically!

The path to a healthy lifestyle includes a balanced eating pattern filled with nutrient-rich foods, not a diet doused in chili peppers.

Myth: Eating late at night slows metabolism.
The truth: There is little evidence to support the fact that eating after 8 p.m. causes weight gain. However, you may be more likely to snack mindlessly in the evenings while watching television.

Eat regular meals and snacks throughout the day to prevent extreme swings in hunger and fullness. If you’re eating later in the evening, do so mindfully and put away the snacks when you’re satisfied.

Myth: Very low-calorie diets and skipping meals can jump start weight loss.
The truth: Creating a large calorie deficit in attempts to lose weight can and will backfire. Our bodies are smart and programmed for survival. Severely limiting calories can make your body think it’s entering a famine and the body adapts to the restricted caloric intake ,and uses fewer calories to perform the same tasks.

*Optimal Nutrition and Behavior Change is a skill.  A skill that anyone can learn with qualified structure and guidance*